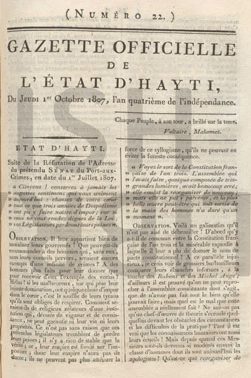 Continuing with its attacks on the Senate of Port-au-Prince, this issue finishes with a sonnet to the “depths of eternity.” “Impenetrable abyss!” the poem reads, “Vast and somber future! what daring eye/in the hidden folds of your lasting circle/would dare to cast a curious glance?”

END_OF_DOCUMENT_TOKEN_TO_BE_REPLACED 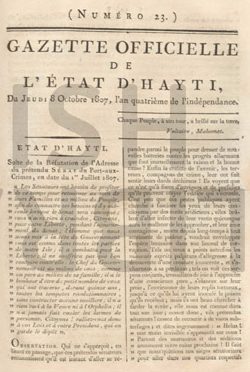 Almost this entire issue is devoted to deconstructing statement’s from “the so-called Senate of Port-au-Prince.” The final resumé of Cardinal Maury’s speech is also completed.

END_OF_DOCUMENT_TOKEN_TO_BE_REPLACED 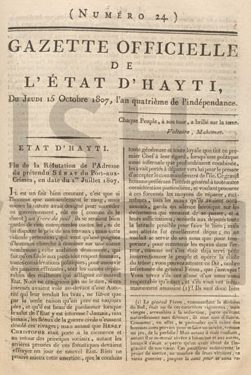 Importantly, this issue contains the first signed article by the newspaper’s editor, Juste Chanlatte (1766-1828), later the Comte de Roziers (also spelled Rosiers). Chanlatte had written one of the first texts to be printed in the new nation when he published a six-page pamphlet called, A Mes concitoyens (1804). His brother, F.D. Chanlatte, was incidentally the editor of the southern republic’s primary newspaper, La Sentinelle d’Haïti (1807-1909).

END_OF_DOCUMENT_TOKEN_TO_BE_REPLACED 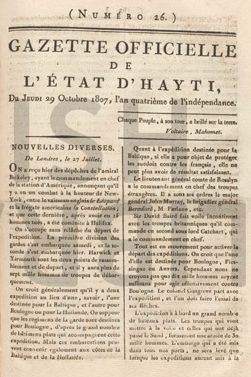 Containing mostly international news, this issue describes a battle between British and U.S. Americans frigates off the coast of New York. A peace agreement between Russia and France is also announced, along with mention of a British strike upon Buenos Aires.

END_OF_DOCUMENT_TOKEN_TO_BE_REPLACED 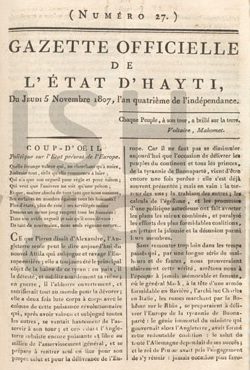 This issue continues to report on the troubles between Russia and France, or rather between the Emperor Napoleon Bonaparte, and Alexander I, the Emperor of Russia. Alongside this more global news, local reports of ships coming in and out of the northern part of Haiti, attest to robust trade with the international community. We learn, for example, that between September and October, fifteen foreign ships entered Haiti bringing various “provisions and dry goods,” while in the same period, eleven foreign ships left Haiti with “coffee, sugar, and cocoa,” ostensibly purchased from Christophe’s republic.

END_OF_DOCUMENT_TOKEN_TO_BE_REPLACED 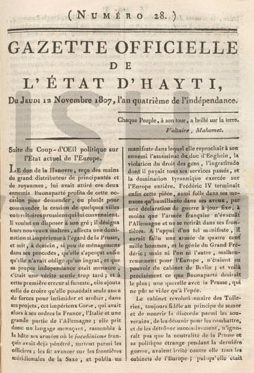 Reporting on President Christophe’s November 7th visit to the capital, Cap-Haïtien, after a considerable absence, we learn that Christophe entered the city to cheers, flowers, and cries of “Vive Henry!” Juste Hugonin’s letter to the president, addressed “Monseigneur,” rounds out the issue, demonstrating the writer’s utmost veneration for the “invincible Henry,” whom he says the Haitian people will “always bless, cherish, and respect.”

END_OF_DOCUMENT_TOKEN_TO_BE_REPLACED 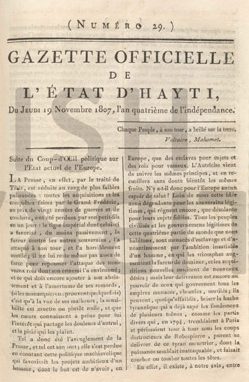 This is a noteworthy issue, principally, because it contains the first signed poem by Juste Chanlatte, who would go on to produce independent Haiti’s first operas with his L’Entrée du roi dans sa capitale (1818); Néhri (1819), an anagram of Henri; and La Partie de chasse du roi (1820). These operas are especially noteworthy for their use of nineteenth-century Haitian Kreyòl in some of the dialogue. The poem that appears here is called simply, “Couplets,” and is addressed to “Monseigneur, le Président.”

END_OF_DOCUMENT_TOKEN_TO_BE_REPLACED 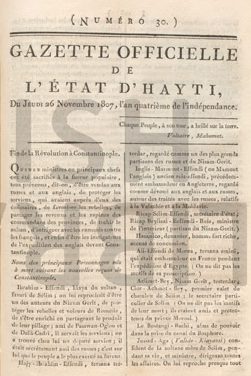 Comprising almost entirely international news from Peltier’s L’Ambigu, this issue finishes with the report of a treaty of peace between Russia and Prussia ratified on July 9, 1807.

END_OF_DOCUMENT_TOKEN_TO_BE_REPLACED 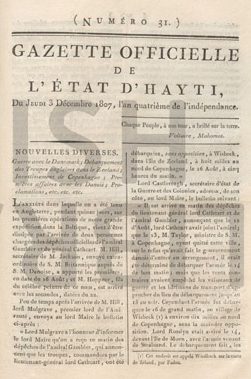 News of the Napoleonic Wars, culled from various European sources, continuously populate the pages of La Gazette Officielle. The way in which Haitians wrote about Napoleon, often referring to him as a “usurper,” underscores their fear of his growing power and influence across the European continent. The northern Haitian government’s support for Great Britain’s attempts to check that power is evident throughout these reportages.

END_OF_DOCUMENT_TOKEN_TO_BE_REPLACED 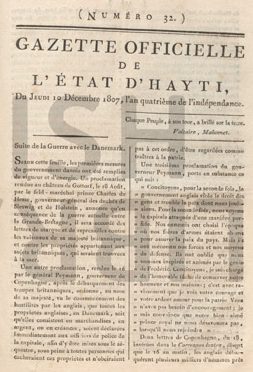 Continuing the tradition of largely reporting international news, this issue contains in large part a resumé of a brief naval conflict (referred to as a “war” in the article) between Denmark and Great Britain, which took place during the Napoleonic Wars between August and September 1807. Often referred to as the Battle of Copenhagen, this British attack of a Danish fleet was an effort to prevent Denmark from co-signing Napoleon’s efforts to expand France’s empire.

END_OF_DOCUMENT_TOKEN_TO_BE_REPLACED 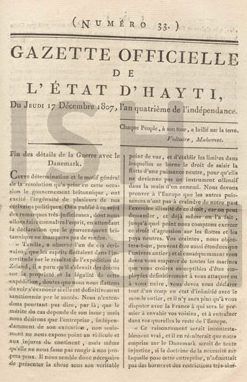 This issue contains only one news article called, “End of the Details of the War with Denmark.” The article purports to provide a sense of Great Britain’s defense of its actions in Copenhagen and challenges the idea that the Danish could remain neutral in the Napoleonic Wars, which at that time involved all of the major European powers, including Prussia and Russia.

END_OF_DOCUMENT_TOKEN_TO_BE_REPLACED 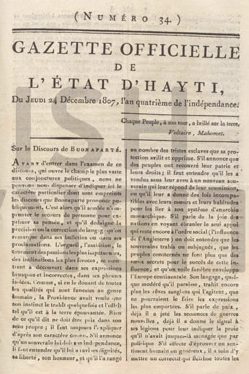 This issue begins with a commentary on a speech given by Napoleon Bonaparte, excerpted from L’Ambigu. The selection printed here mentions Bonaparte’s recent treaty of peace with the Emperor Alexander I of Russia. The writer casts suspicion on the the First Consul of France’s motives, however, by suggesting that he duplicitously entered into this “contract” solely “with the intention to subsume the Russian empire into his own.” The issue finishes with a rundown of foreign ships entering and leaving the ports of Haiti, demonstrating once again a robust environment of international trade between Haiti and its Atlantic neighbors.

END_OF_DOCUMENT_TOKEN_TO_BE_REPLACED 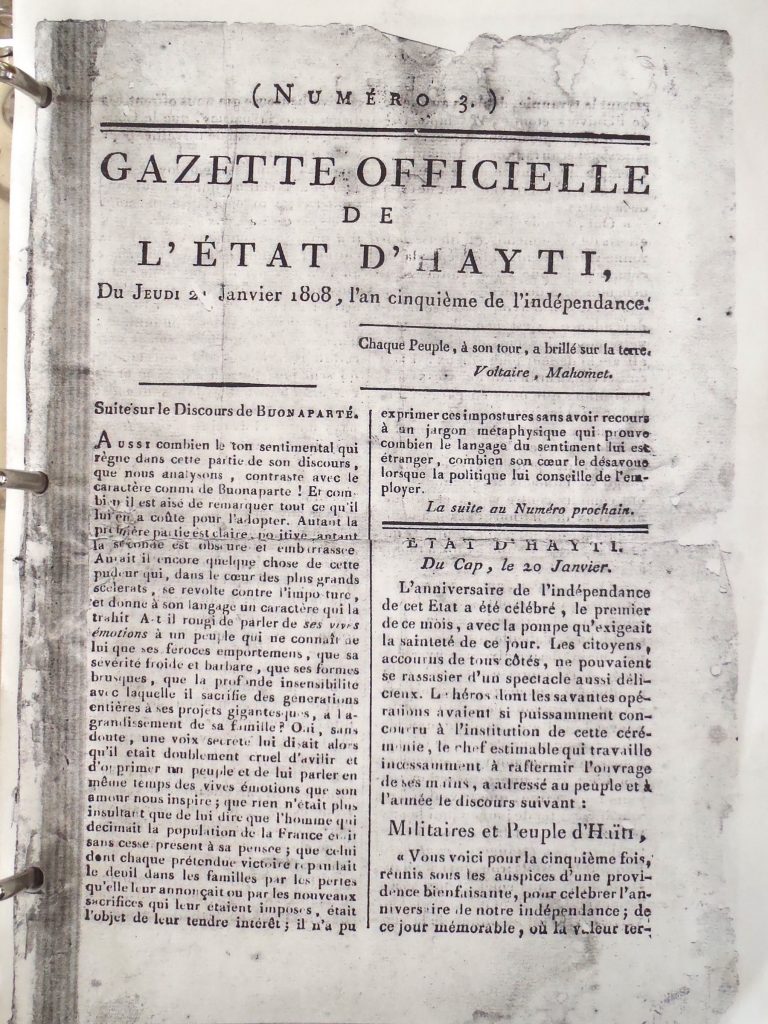 The principle article in this issue describes a speech given by President Christophe for the celebrations marking the fifth anniversary of Haitian independence. Christophe spoke to the Haitian people on the first of January about the robust and profitable industry, commerce, and agricultural production of northern Haiti. The president even boasted of continue trade with other countries, bragging just a little bit that, in his words, “you have even seen the citizens of a country whose unjust laws forbid trade with you, hasten, in spite of their Government, to bring us supplies of all kind, and to become for us one of our most important branches of commerce.” After the end of the speeches, Christophe was treated to “unanimous cheers” of “Long live independence! Long live liberty! Long live Henry!”

END_OF_DOCUMENT_TOKEN_TO_BE_REPLACED 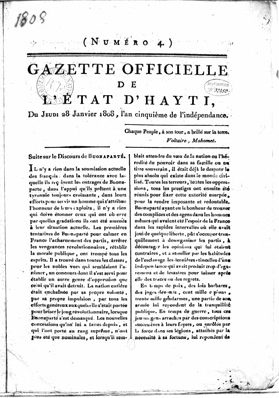 Almost entirely taken up with an excerpt from L’Ambigu commenting on Napoleon Bonaparte’s continuous attempts to expand the French empire, this issue also announces a new law requiring a tax of twenty-four gourdes to be paid for all sugar imported into Haiti from abroad.

END_OF_DOCUMENT_TOKEN_TO_BE_REPLACED 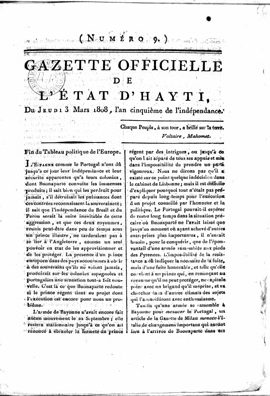 Continuing to report on the “threatening” movements of Bonaparte, particularly, his designs on the South American colonies of Brazil and Peru, this issue finishes by announcing a new law in Haiti. The law, which was passed on February 29, 1808, states that “any person traveling to the interior of Haiti” will now be required to “hold a passport, or risk arrest.” Primarily aimed at military deserters, the president states that this mandate will mitigate the potential for such “abuse.”

END_OF_DOCUMENT_TOKEN_TO_BE_REPLACED 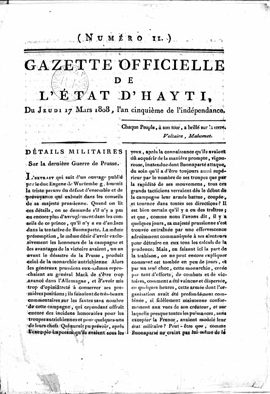 The final article of this issue criticizes French attempts to circumvent the usual and customary trade tarifs imposed on goods moving between the colonies and various European metropolitan centers. The newspaper reports that the United States, potentially the “secret enemy” referenced in the article, concluded a treaty with France allowing them to help Bonaparte to get his hands on colonial goods at a much cheaper rate than that imposed on the British, for instance. The writer of the article reports that Great Britain considers this Jeffersonian produced policy to be “political suicide” and perhaps rather audaciously states that “a war lasting a few months might suffice to convince [the U.S.] of their unreasonableness and punish them for their insolence and audacity.”

END_OF_DOCUMENT_TOKEN_TO_BE_REPLACED 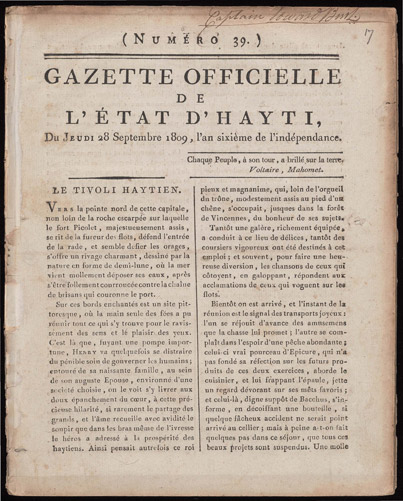 The only article in this issue is called, “Le Tivoli Haytien.” Tivoli Gardens is a famous amusement park in Copenhagen, Denmark and is the second oldest such institution in the world. The Tivoli of Haiti is described here as the place where President Henry Christophe seeks refuge in order to “distract himself from the painful duty of governing humans.” According to the article, this place of rest and amusement, “worthy of Bacchus,” is located near the northern tip of the capital, Cap-Haïtien, not far from the “craggy rocks” upon which Fort Picolet sits.

END_OF_DOCUMENT_TOKEN_TO_BE_REPLACED 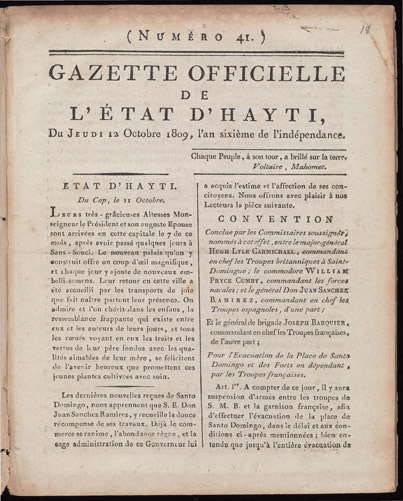 The first article in this issue mentions President Christophe’s recent visit to the construction site of the palace at Sans-Souci. The second article reports on the military successes of General Don Juan Sanchez Ramirez, who led the Spanish opposition to French rule over the eastern side of the island of Quisqueya. Importantly, this war, often referred to as the reconquista of Santo Domingo, which lasted for eight months between November 1808 and July 1809, reestablished Spanish control over the colony. The article notes in great detail Ramirez’s successes against the French army, led by Governor Marie-Louis Ferrand.

END_OF_DOCUMENT_TOKEN_TO_BE_REPLACED This issue consists almost entirely of a lengthy excerpt from L’Ambigu reporting the victory of the Austrians over Napoleon Bonaparte’s forces on 21st and 22nd of May 1809. Called the Battle of Aspern-Essling, the article recalls how Bonaparte attempted to cross the river Danube, near Vienna, after establishing himself on the island of Lobau. Led by the Archduke Charles, the Austrian military swiftly forced Bonaparte and his troops to retreat.

END_OF_DOCUMENT_TOKEN_TO_BE_REPLACED This issue begins with a proclamation issued by President Christophe to those blockaded in Môle Saint-Nicholas as a result of the civil war with the southern republic of Haiti. With this proclamation, Christophe offers amnesty to all the cultivators, citizens, and military officers of any rank, be they men or women, in exchange for an “apology for their mistakes” and their “return to duty.” The apostolic prefect of Haiti, Father Corneille Brelle’s addresses follows that of Christophe. Brelle, too, encourages those currently under blockade to take advantage of the amnesty offered to them by “the good president Henry Christophe, the good father of Haiti.”

END_OF_DOCUMENT_TOKEN_TO_BE_REPLACED

Use the free commenting feature on each article to highlight, identify and offer information and your thoughts about the many people whose names populate these pages.  Join the discussion – it’s free! Here’s how:

See the comments on each post by clicking the pop-out tool in the upper right of your browser:

Create your own (free) Hypothesis account and log in. To leave a comment or annotate text, highlight the text you wish to comment on, and when it is selected, you will see the options appear to Annotate or to Highlight the text: 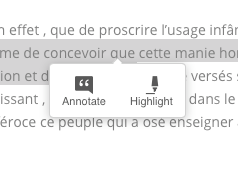 Then use the comment box on the right side to add your voice.